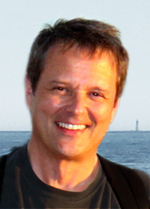 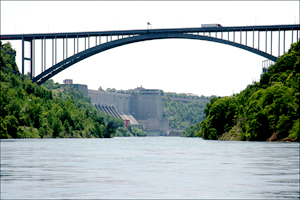 hh, the courage of youth! Cheers to that! — sadly missed when it fades. Back then, it was just a whim: let's drink gallons of beer and do something really WILD! Little effort was needed to talk your pals into devious behavior. We'd do anything simply because we could!

That warm and whacky summer night, we headed out around 1:00am for an adventure. The participants, and luckily, survivors: Mike McCarthy, Steve Olick and Renee Hansen. We had a wild and plentiful (!) party earlier that night at my parent's house (they were away on vacation). Out of the blue, we decided to go out walking after midnight.

It was my decision to head for the bridge. I figured we'd just walk there and back for the heck of it — we had no agenda. I'd been there dozens of times before and was always inspired by the hugeness and height of it when viewed from below. I wanted Steve and Renee to see it too.

The gigantic concrete abutment that holds up the arch on the American side rises about 40 feet from the trail and is lined on one side with a column of square U-shaped ladder rungs anchored in the concrete. There's probably about 40 rungs to climb to get to the abutment platform where the steel arch begins. We climbed up the ladder and walked around on the giant concrete platform. After a few minutes of fooling around up there, someone got the notion of climbing the arch. I don't remember whose idea that was, but no way! — we're just joking around — we couldn't really do that — we'd fall to our deaths for sure! ...Well, guess what?...

The arch structure is actually two parallel arcs separated by an array of repeated K-shaped gusset plate brackets connecting the two forms. We scaled the north arc (foremost visible in the photo below). The arch girder is about 6 feet wide, an ample rail to walk on. Studded everywhere with 5" rounded bolt-heads, the steel surface is ideally texturized for a good foothold in bare feet — we took off our shoes and socks for a better grip. — Holy Spiderman! 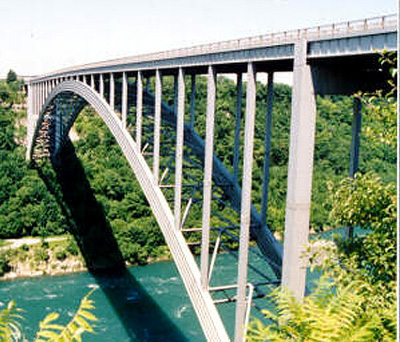 Visible in the next photo, there is a chest-high 1"-thick cable spanning the entire arch parallel to its outer edge. Without this guide wire, the climb would be almost impossible — there'd be nothing to hold on to and down you'd come all baby-cradle. So 80% of the climb involves hand-over-handing the cable, pulling yourself along up the incline just like the worker is doing in the photo. The other 20% is the most hellacious and horribly dangerous part. Read on...

Every 30 feet or so, we'd come to a massive wall extending the entire width of the arch. These are the vertical struts that rest on the arch and hold up the road deck above. At first, it wasn't clear how to get around them — the cable railing is useless here because it ends abruptly at the left edge. We discovered a square U-shaped handle extending out from the right edge (the inner part of the arch near the K-brackets). If you hold the handle and extend your body outward to the right, you'll see the matching handle on the other side of the vertical, about 3 feet forward. Now here's the scary part — to traverse the 3-foot vertical, you have to grab the handle with your left hand, swing your right leg out (over the water!), grab the other handle with your right hand, plant your right foot back on the arch and pull your body to safety(?) on the other side. Why scary? ...the maneuver has to be done in one motion and you get no practice shots! ...if you miss, you're chillin' with the Creator all harp-and-halo!

Imagine doing this move not once, but twelve times to reach the top of the arch! (You can count the verticals in the photo - the skinny ones.) Now, if this isn't crazy enough, pour 9 beers down your neck and imagine it again — Whoa Nelly! ...Hey, this is easy! ...hic. — We were undeniably insane! 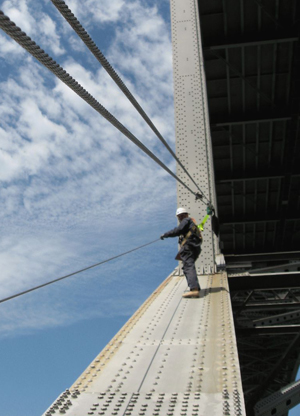 So there you have it. We climbed all the way to the top of the arch — the center of the span — 370 feet above the water, sat down cross-legged, let go of the cable, laughed, smoked cigarettes, and for good luck, tossed nickels into the abyss below — strangely, we had no pennies! The vertical gap, at that point, was almost high enough to stand — you had to bow your head just slightly. It was loud too! The cars and trucks were roaring by overhead — and we were right beneath them!

We talked about continuing on all the way to Canada but ruled that out on contemplating the difficulty of our return — should we climb the entire arch back again?... or scale the gorge on the Canadian side and walk over the bridge? What would we tell the customs agents? After determining that we'd likely end up in Canadian jail, we decided to return the way we came. Hey, the journey back down would have been the same as the journey to Canada anyway, right? Going back down was faster. We'd had a lot of practice and we were tired and eager to get home.

We got back to my house around 5am — the sun was coming up. We had quite a tale to tell.

Life is full of ups and downs and occasional hurdles to overcome. Seems that if you stay focused and soldier on, you might make it. Just like we did scaling that arch. But, in reminiscing, I can't help thinking those were some damn lucky nickels! 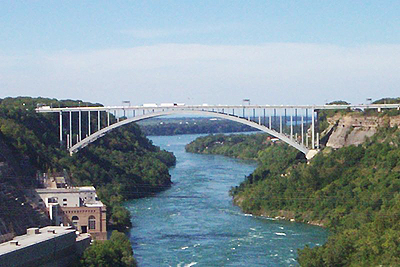 This is a true story.

Hi Renee if you're reading this.

Sadly, Steve passed away in 1984. I dedicate this page to him.